Thank you for your patience while we retrieve your images.

Stuck in the Ice

For two weeks from 24th December 2013 the ship Akademik Shokalskiy was trapped in thick ice in Commonwealth Bay, East Antarctica, while on charter for the Australasian Antarctic Expedition 2013-2014.

I was the doctor and photographer on that expedition and found myself at the center of what became a worldwide media story. I used satellite modem technology to upload images that were picked up by news agencies, magazines and online. Many of this series were published in News Dispatches by National Geographic online.

We were eventually evacuated by a helicopter from the nearby Chinese icebreaker Xue Long to the Australian icebreaker Aurora Australis on 2nd January. On 8th January Akademik Shokalskiy was able to get clear of the ice through the efforts of the Russian crew who had remained aboard.

The expedition's findings—and my photographs—aim to focus attention on the issues at hand in Antarctica with regard to climate issues and on the beauty of this incredible area. Much is still unknown about the frozen continent, partly because of its harsh conditions, and scientists are particularly interested in the impact of the changing climate there. 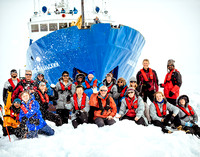